Flushometer Maintenance: How to Fix a Toilet with No Tank

A flushometer (pronounced “flush-o-meter,” like speedometer) is the device used for flushing a toilet that has no tank. Such toilets are most commonly found in public restrooms. These are not very common in homes because they are really not a very attractive addition to the family bathroom.

This is what a typical toilet and flushometer assembly looks like.
Image courtesy of le-compass.ca

Flushometers may be installed on urinals or toilets, and they look exactly the same from the outside, the difference being in the diaphragm installed. The diaphragm on a toilet flushometer will allow a longer flush with more water than a urinal for what should be obvious reasons.

There are a few different manufacturers or flushometers, with the most common being Sloan or Zurn. There are some labeled Royal, but Royal is made by Sloan, so they are pretty much the same. Most of the innards are very similar, so if you don’t happen to have access to one manufacturer’s replacement diaphragm or vacuum breaker, you can probably use parts from the other manufacturers, at least temporarily.

If you’re responsible for maintenance at a motel or are a school custodian, you may have had issues with flushometers, the most common issue being flushometers that run constantly or leak around the vacuum breaker. If your building has many flushometers, then you’ve no doubt had issues after the building has had a water outage for some reason. It’s inevitable that when the water pressure was fully restored, at least one flushometer failed (the ones that fail seem to have trouble reseating after the system burps out the air that became trapped inside when the water pressure was lost).

Where Do We Begin?

If you get the call to repair a toilet that keeps running, you need to start by securing the flushometer stop valve. The stop valve is an elbow shaped object attached to the flushometer. It will have either a large threaded cap that may need a wrench to remove, or a small cap that can be removed by prying it with a flat head screwdriver. Once the cap is removed, you can use a flat head screwdriver to shut the valve by inserting the screwdriver tip into the slot and turning clockwise (remember: righty-tighty, lefty-loosey) until the water stops.

Here you can see the outside of a Sloan Flushometer with the parts listed.
Image courtesy of plumbingsupply.com

If you don’t get it to re-seat by shutting it off and turning it back on again, you will have to break into the top and make repairs.

Start off by trying to clean the existing diaphragm. With the shut-off valve in the shut position, use a set of large channel lock pliers or a pipe wrench to remove the top (there will be a large hex head to put the wrench on to remove the top). When you have the top off, pry up the existing diaphragm assembly and inspect it (there is a hard plastic cap that sits on top of the diaphragm. Don’t make a mistake and think it’s just an old style. If that hard plastic piece is not included in the reassembly, it will leak). If it doesn’t appear to be to worn, run it under some water and scrub it with your hands or a scrub brush. After giving it a thorough cleaning, reassemble it and go back to step one. If you still haven’t solved the problem, you will need to replace the diaphragm.

To replace the diaphragm, follow the instructions in the last part, but instead of putting it back together with the old diaphragm, use a new one. It’s best to use replacement parts that are the same brand as the original, but many will say right on the box which other brands they will work for. Do remember: a toilet diaphragm and a urinal diaphragm allow different water flows. Use the proper diaphragm for replacement. The box will tell you which it is for. 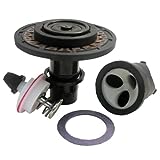 You can buy a repair kit that will contain these parts to fix a leaky flushometer.
Image courtesy of ecx.images-amazon.com

If you’re replacing the diaphragm, it’s usually a good idea to replace the vacuum breaker as well. It is located at the top of the pipe leading from the flushometer to the toilet. You can remove it by undoing the hex nut holding the pipe to the flushometer.  After you disconnect the pipe, you will see it sitting in the top of the pipe in a recessed area. Just pry the old one out and replace it, then put it all back together.

After this, your flushometer should be as good as new for many years to come!

Have questions? We can answer them.
Need help? We love to help.