The Importance of Water Conservation: Living with the California Drought

Recently the Plumbing Circle blog reported on a new law affecting the homeowners in California, which requires them to retrofit their older homes with newer water-conserving plumbing fixtures by the year 2017.

The impetus of the law is the seemingly limited and dwindling water supply for an ever-growing population in the state. While some residents, building contractors, and code enforcement officials are not happy with the law, scientists and environmentalists believe that these steps are inevitable. 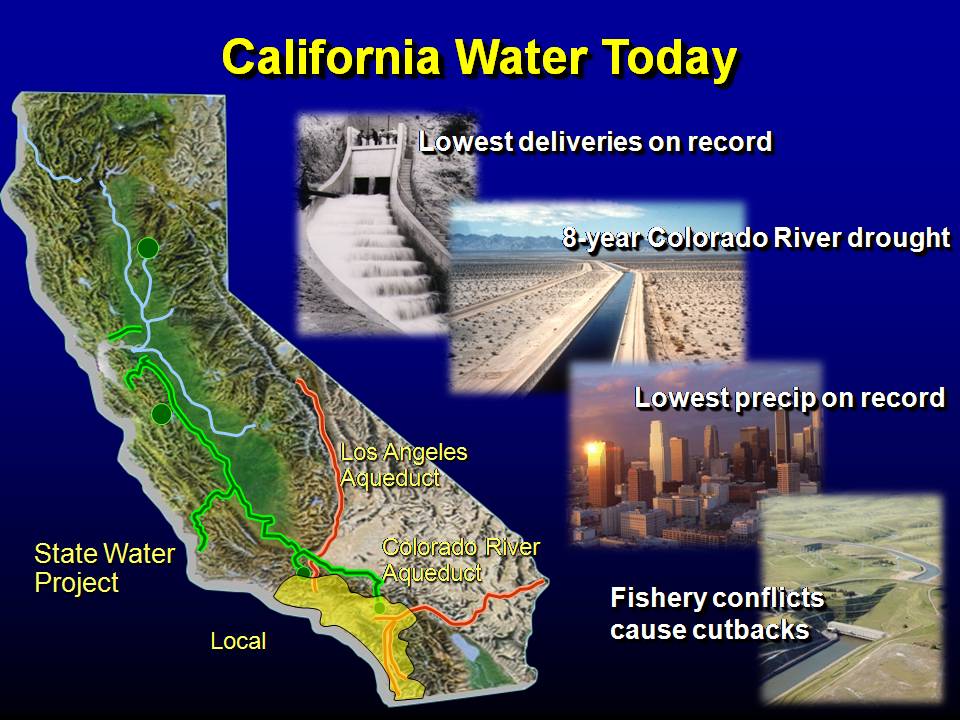 Californians both North and South are being asked to conserve water these days.
Image courtesy of energysavers2.com

Much of California has been in drought situations for the better part of the past few years, and if steps aren’t taken now, the situation will only get worse. NBC Bay Area reported on December 10, 2013 that Sen. Dianne Feinstein and Rep. Jim Costa had sent a letter to California Governor Brown and President Obama asking them to take action, mainly due to the California Department of Water Resources’ recent announcement that there would be low water deliveries for parts of the state thanks to light rainfall projections. Other members of the state’s congressional contingency also drafted a similar letter. By now, a drought state of emergency has been declared in California.

How Did California Get to This Point?

In an article titled “Plumbing California,” National Geographic tells the story of California’s building of a complex system that was to supply the state with enough water over the course of the twentieth century. However, even with all of that planning and construction, the system is still overburdened by the constantly increasing population.

In short, it seems to all come down to where the water is and where the people are in California. Most of the rainfall and snowmelt (about 70%) that supplies the rivers, aqueducts, and canals falls in the mountains in Northern California, and most of the people (about 80%) live in Southern California, along with millions of acres of farmland producing much of the country’s fresh produce.

A system already overburdened and in peril will become a disaster should Mother Nature make her wrath felt in the form of an earthquake. She’s already using more subtle methods like a rising seawater level that is encroaching the tops of the levees in place to keep the Pacific in the ocean and California in the U.S.

What Is on the Horizon?

Desalination plants and water recycling plants are being planned, and some have already been activated.

The desalination plants take salt water from the Pacific Ocean, remove the salt, and treat it to make safe drinking water.  These plants are expensive to operate and use about a 2:1 ratio—meaning for every two gallons of salt water intake, one gallon of drinking water can be discharged to make drinking water.

The National Geographic article mentioned above claims that upwards of 70% of the water being delivered to households in Southern California is being used for applications outside of the home. That being said, it would be advisable for residents to investigate plant life that is more suited to living with less water, with municipalities clamping down tighter on the amount of water used for these purposes. The state has already mandated a 20% reduction in water usage throughout the state by the year 2020 as compared to the usage in 2009.

Another way for Californians to conserve water is to use low-flow plumbing fixtures. Here at the Plumbing Circle, we will do all that we can to ensure that if you’re not already on board with these efforts, that you can get there as easily and affordably as possible. We can help you learn how to install the devices yourself, and also find the right plumbers to help you on projects that you can’t handle yourself. Get prepared for water conservation today!

Have questions? We can answer them.
Need help? We love to help.